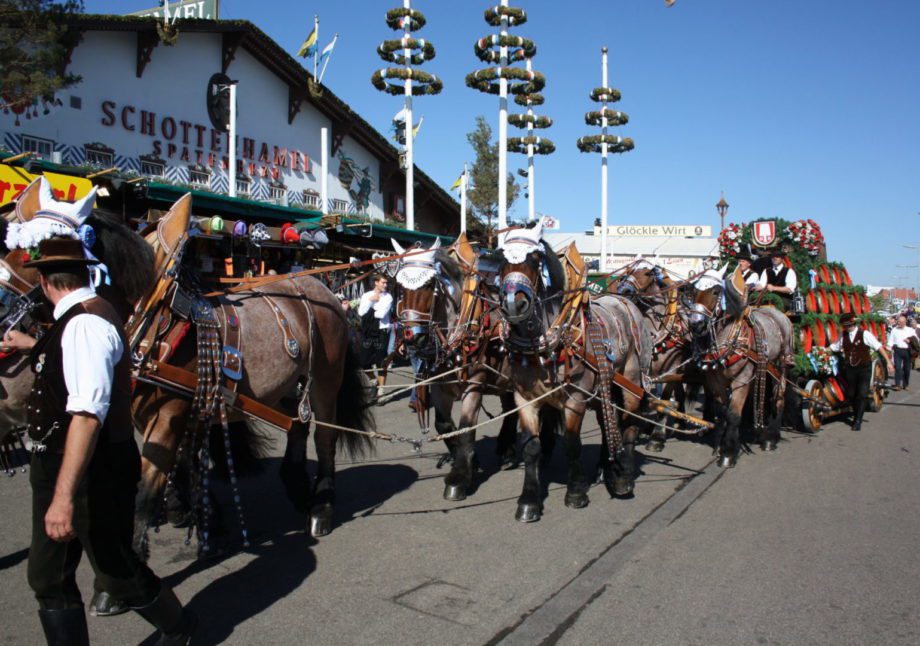 Getting to Munich’s Oktoberfest can be quite the ordeal, with all of the world’s beer lovers pining for a mega-pint of that delicious Bavarian nectar. But never fear, not only do we provide the best value for money and most fun Oktoberfest camping accommodation in Munich, we have also whipped up this handy little guide to travelling to Oktoberfest, so that you can join us in making the most of this first post-pandemic edition of the world’s biggest folk festival, and the original and by far best beer festival.

Travel to Oktoberfest Munich by plane

Travelling to Munich by plane is the gold standard in convenience and speed. By far your best option is to fly into Munich, and then simply ride the train from Munich’s international airport all the way downtown. The whole process is smooth, easy, and usually pretty cheap. BUT this isn’t an ordinary year, and prices are already rising, meaning that usually reasonable routes are filling fast and as such, prices are getting jacked. That said, there are still deals to be found, and we did a little search using Google’s amazing flight finding tool. These were the last minute deals in 2022, so get in earlier so you get them cheaper.

Oktoberfest flight prices from around Europe to Munich

There’s not much better than visa-free travel around Europe’s Schengen zone. We found flights from Dublin, Paris, Barcelona, Madrid, Lisbon, Rome, Athens, Copenhagen, Oslo, Stockholm, Krakow and Amsterdam for between €150 and €250 depending on when you fly. We didn’t search for all European cities, but we’d expect them to be in a similar ballpark.

Around €200 return for weekend trips, cheaper midweek. The Thursday before Oktoberfest starts (so two days before the beer halls open and when Stoketoberfest cracks open its open bar) there are flights for €180, but you’d want to snag them asap.

If you wanted to fly all the way from Down Under to Oktoberfest, we strongly recommend that you make a bigger trip out of it. That said, there are flights that will get you there the wednesday before the Oktoberfest opening ceremony for about $1,700 – or the price of a six pack in Sydney.

Oktoberfest flight prices from the USA and Canada to Munich

Flights from the east coast of the US to Munich are currently around $800 for dates around Oktoberfest. Add $200 if you’re flying from the west coast. Flights from Canada run a similar schedule, with the flights from Vancouver being a couple of hundred Canadian dollars more than those from Toronto, but you gotta account for that pesky exchange rate, eh.

Flying to Munich hints and tips

Travel To Oktoberfest By Train

If you’re lucky enough to already be in Europe, train travel to Munich for Oktoberfest can be a cheaper, slightly slower, more comfortable alternative to flying. Anywhere in Germany, Switzerland, Austria, the Czech Republic, Hungary, France and surrounds will have cheap and fast train connections to Munich – we’re talking less than €100 return. We even found a €60 return trip from Rome! All of these trips are going to take less than six hours, which when you consider travelling to airports from the centre of town and vice versa, ain’t all that much of an inconvenience.

And once you get to Munich you’ll arrive a literal stone’s throw from the Oktoberfest fairgrounds, and a short metro ride to the Stoketoberfest campsite.

Also, it’s very ok to drink beer on European trains (for the most part, don’t quote us to the authorities if it’s not), so what better way to watch the European countryside slide by, while getting a little bit of a buzz on?

When looking for trains around Europe, we like using the German railways own website and search engine at bahn.de, because we just trust them to get it right. Bloody efficient lot that they are.

Travel To Oktoberfest By Bus

General rule of thumb here is to half the train ticket price and double the time required to make the journey. From many European cities, a bus is a very reasonable way to travel to Oktoberfest – particularly if you’re booking last minute. Buses in Europe are comfortable-enough affairs, safe and the highways they roll along wide, fast and full of German engineering travelling close to the speed of sound.

You can find bus times and prices with aggregator sites like Omio or Rome to Rio, or FlixBus seem to go everywhere, always.

If you’re a true fun-lover, Stoke Travel operates buses to Oktoberfest from cities like Budapest, Prague, Paris, Amsterdam/Brussels, London, Florence/Milan/Torino, Vienna, and Berlin. Check out our buses and prices here.

Travel To Oktoberfest By Car

Look, this is the world’s biggest beer festival so we don’t really recommend driving, BUT if you have access to a car – or enough people to justify hiring one – and a good designated driver system, then driving could be an option to get you to Munich, arriving in style and comfort on the autobahn. There are a few considerations to take when opting to drive:

Also, you could consider ride sharing with apps like BlaBlaCar, hitchhiking, or even walking/cycling through Germany’s extensive trail networks, but if you’re going to do something like that then you’re already intrepid enough to get yourself to Munich without our help.

As with any travel, the arithmetic that we have to do is: how convenient do I want/need my arrival to be VS how much am I willing to pay. Flying is by far the easiest and fastest way to arrive in Munich, but won’t be the cheapest. Train’s aren’t far behind – usually twice the time and half the cost – and are an excellent option if you’re starting your journey from nearby. Buses will again double time and halve costs.

Whatever you choose to do, you can always offset the cost by staying in Munich’s best value and most fun accommodation option, where for €65 a night you get not only somewhere to sleep, but brunch with bottomless mimosas, live music and DJs, a wild party in a festival wonderland, and the opportunity to meet 1000s of likeminded travellers and beer lovers from all over the world – and then hit the beer halls with them. See our Oktoberfest 2023 packages here.

We do recommend that you get everything in order ASAP, and lock in your trip, because it’s just going to get more expensive. This year’s event will sell out! So don’t get left snoozing. See you in Munich!