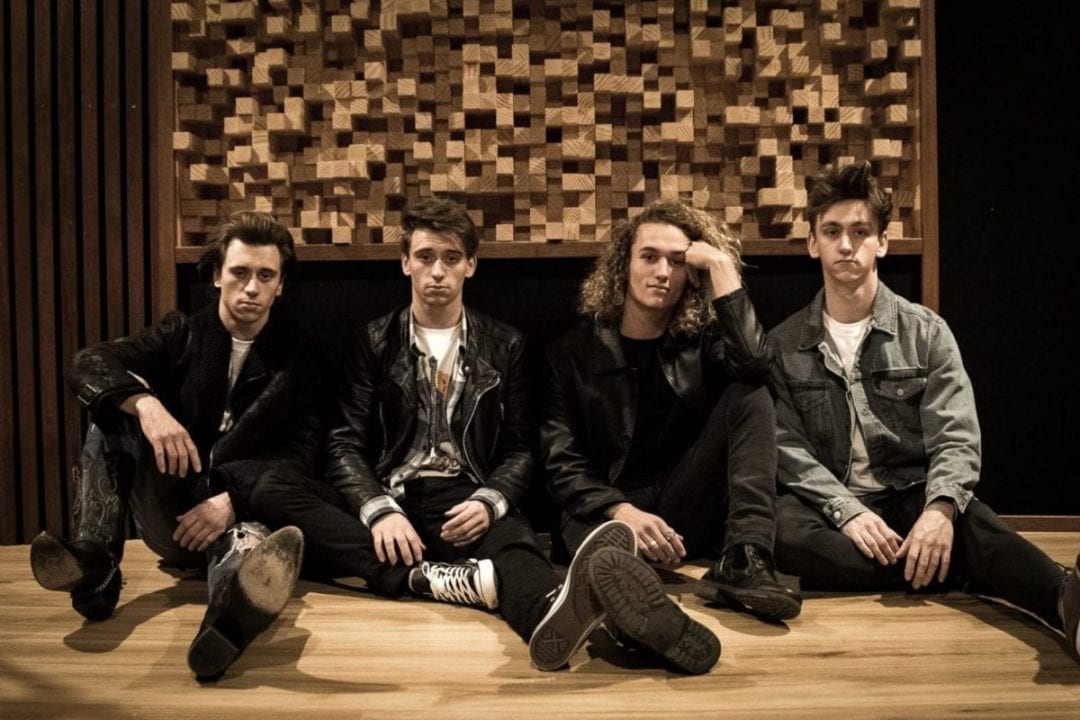 Any Young Band Dreams of Touring Europe, But For Wicked Things, It’s Happening a Lot Sooner Than Expected.

Wicked Things will be realising their European rockstar dreams thanks to The Global Work & Travel Co, who can help you get yourself OS without all the BS associated with big moves.

Recently, an epic battle of the bands hosted by Soundcheck took place in Sydney. We scoured the land down under for the best of the best, looking for the winner who would spend the summer with us here in Europe, attending all the festivals and concerts Stoke has to offer. Not just attending, but touring and performing – sometimes alongside the legendary Dune Rats. Sounds like a dream, right? Well for the new and upcoming Aussie band Wicked Things, it’s their reality.

So who are Wicked Things?

Well, for starters the four members of the band are all brothers, two of them being twins. They claim that this is the secret to their success as a band.

“I think a big part of it is because we’re all brothers, while we’re performing we have that interaction with each other and the audience can read that energy on stage. We grew up with each other so we work as a unit pretty well.”

It was clear when we chatted with the lads that they were all pretty close, as a band and as family members, despite the band only being one year old. During the tour, the band will be on the road, sleeping in camping tents on the festival grounds. I asked them how they will survive, being locked together for three months straight, this could make or break the band, and maybe their relationship with each other. They seemed undisturbed and completely up for the challenge.

“We’re brothers! We’ve been living together for over twenty years!” they assured us and watching the guys joke around and reading the energy in the room, they seemed more like best mates than brothers.

During the soundcheck competition,  plenty of bands came from all over the eastern states of Australia to perform, Wicked Things couldn’t believe their luck when the presenter called their names.

“What the fuck has been the catchphrase of the month,” they said.

But luck can’t be all that got them through to the final round, we asked them about the performance and why they think they won.

“We’ve been playing music for a long time. I don’t want to sound like a dick but we just played really well. We’ve been brought up listening to a lot of rock music.”

And we can safely say they look the part. Sporting some awesome Wicked Things merch, they’re obviously very outspoken and passionate about their music. As we talked some more about their genre, they spoke about how they were stoked for  London Big Day Out, as rock music started in the English capital, and they have a strong connection with the place. Not only do they look the part, but the lads know how to put on a show.

“We all do some form of acrobatics and martial arts, so when we go live, people aren’t just there to listen to music they want to see cool stuff too. So we’ll do flips off stage and do the splits and jump kicks. And even lame stuff like playing the guitar back to back like they did on those cheesy 80’s rock videos. The crowd loves it.”

Anyone who has been on a Stoke trip knows things can get pretty rowdy. From our Running with the Bulls fest in Pamplona to tackling the mosh pit at Stoked in the Park concerts. When you’re off your face on our deadly sangria, our trips can get wild.

“I think that maybe your martial arts will come in handy on our trips, last year we had stage invaders, have you ever experienced that while performing?”

“Absolutely. At the audition soundcheck performance, we had to do that. We got asked to play an encore and this guy tried to unplug my equipment while we were still playing and threw a beer can at us.  And he tried to come up on stage and hit one of us so I kicked him in the chest. I guess he was upset that we got asked to do an encore and he was waiting to play his bit. And then afterwards when we won they tried to come up to us and demand hospital fees!”

Sounds like they have nothing to worry about when it comes to defending themselves from crazy fans, it’ll be a great show for us if it happens. To make an amazing opportunity even better, the lads will be playing alongside Dune Rats, touring with them throughout Europe and getting up to all kinds of drunken shenanigans. “We heard they’re rowdy as”. Rowdy is one way to put it, if you’ve been living under a rock, check out one of their music videos here that they’ll be performing at our festivals.

“It’s so crazy for us to think about. It’ll be great to pick up some kind of know-how from them and learn from them. They will kind of be our mentors.”

Paid flights, access to all our wild festivals, meals and unlimited booze. It’s enough to make any young rock band go crazy. We suggested they’ll probably get up to no good and if they’re likely to fall off the wagon. And while being a young rock band on the road has temptations, Wicked Things seem intent on taking this opportunity seriously.

“The band is a year old and as much as it’s going to be a good time, we’re here for business. We don’t want to miss the opportunity, we’ll have a rad time of course, but we don’t want to fuck around. We are here for business and to make a name for ourselves.” But that said, they are young Aussie boys living their dreams. And there will be plenty of opportunities to get up to no good.

“Cooper will be the biggest liability” they all agreed jokingly, “he’s the biggest out of us so it will take all three of us to take him down, especially on drugs,”

We asked the hard-hitting questions,

“You’ll be stuck together for a very long time, who will be the most annoying?”

They all immediately said Kaleb, who did not look surprised. “He’s not a black belt yet so we can take him down no worries if he’s being too annoying”, they laughed.

We asked the lads what was on their rider (a rider is a list of things performers ask for before they go on stage). We were thinking dentist prescribed cocaine served on a gold platter or cigars made in Cuba. The joked all they wanted was a decent cup of tea and a comfortable pillow. They said they’d give it more thought and get a list going, there was talk for a 1996 Ford Mustang and basement brewed beer…so we’re sure it’ll be interesting!

2019 is Wicked Things year, but next year it might be yours. The band shares some advice on winning next year’s Soundcheck.

“Have fun. Don’t take it so seriously, don’t try to win. We’ve seen some entries and different battle of the bands and it’s always the sponsored band that gets the ticket. So we actually assumed this comp was rigged. So we were just like fuck it we’ll play hard and have fun and make asses of ourselves and do our thing, and it worked in our favour.”

“Being able to work a crowd is so important.  We just do what we normally do back home. We play like we do for three people as we do for 300. We thought others had it in the bag. When we found out we won it was the most emotion I’ve felt in years! If you’re confident in your band, be your band don’t do what others do.

Our last question was what they were doing to prepare for their trip of a lifetime, their tour starts on the 15th of June in London.

“We are writing more songs like crazy, we got some more material and the songs are doing really good. As for our jobs, we’re pretty good at what we do so they’re happy to have us back afterwards. But hopefully after this, we won’t have to and we can continue making music. We can just fuck off on another tour.”

Sounds good to us guys! Check out their Instagram and keep updated on their journey. We can tell they’ve got big things planned!

You may not have won a Soundcheck all-expenses-paid-for adventure, but you still don’t have to miss out on this amazing summer! Join us at one of our festivals and come hang out with the incredible Wicked Things band and watch them play live alongside Dune Rats. Come join the madness, it’s going to be one to remember.