Prague: Police And Justice In One Night 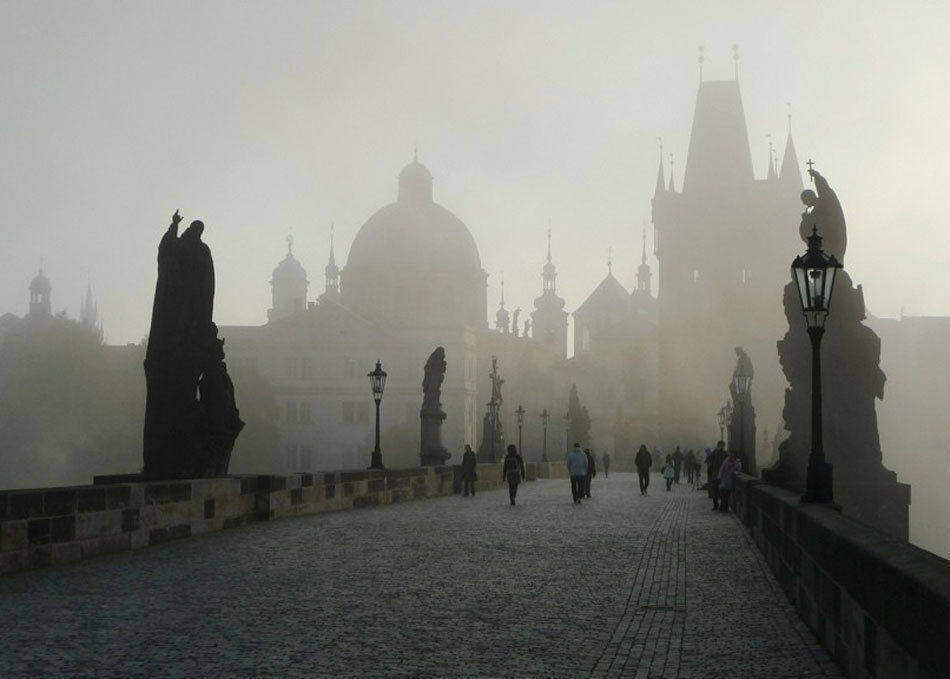 The perfect combination in Prague

It was the end of a very fun, very long, fucked up night. Tired, sweaty and freezing cold in the early morning air, my two friends and I had stumbled out of a club somewhere in the Prague back streets just in time to catch the 4.30 a.m. tram into the city.

Like many public transport systems in Europe, the Prague trams run on an honour system. I don’t even know how much a ticket in Prague costs – like many other transient swine, I’d happily go without honour if it meant a few more coins rustling around at the bottom of my back-pack. Usually, riding the tram for free is easy to get away with: the doors to the tram open, you step on, sit down, and blink your eyes innocently at the old lady who turns around in her seat to glare at you in all of your dishonourable Stoker glory.

This particular night, though, it all went wrong. The doors opened, we stepped on, sat down. The doors shut. There were three other people on the tram. Before I had a chance to sweep their faces for judgmental looks, Judgment itself was standing in the aisle, casting its shadow down over all of us. By judgment, I mean one tram warden and two policemen. From where I sat I was at eye-level with their holsters, which each held three very large guns.

With thickly accented English, they demanded to see our tickets, despite obviously knowing that we hadn’t bought any. There was no point in lying. We shook our heads, but they still asked us again, presumably just to be absolutely certain that we were criminals before they used their pepper-spray on us and beat us up in an alleyway. We shook our heads again, and tried to explain ourselves by saying that we didn’t know where we could buy tickets. They told us that we could buy tickets from the post-office, which we kindly informed them was not an option at this hour of the night – but if they took us in their car to an open post office, we would happily purchase a ticket each.

The language barrier obviously meant that they couldn’t understand the pure logic of our suggestion in terms of conflict resolution, so they demanded that we hand over our identification. It was about this point, alarm bells ringing as loud in my ears as the music from the club had been a few short minutes ago, that I remembered Lonely Planet horror stories about people dressed up as cops taking advantage of young, dumb, travellers. Suddenly the idea of having Czech “policemen” in possession of my passport seemed like the worst thing in the entire world – worse, somehow, than any consequences that might have come from my refusal to give it to them. With a gun so close to my face that looking directly at it made me cross-eyed, I told the men that I didn’t believe they were real police officers, and that if they thought I was handing my precious passport over to them, then they could get fucked.

Needless to say it took my friend Ellen less that two seconds flat to snatch the passport from my clutches and hand it over to the armed men in uniform. Suddenly, things felt terrifyingly real. My heart sunk to the very bottom of my stomach.

The oldest police officer told us that seeing as we didn’t have tickets for the tram, we would each have to pay a fine of forty euros. For the last two weeks we had only eaten lunch if we had been able to sneak enough bread and fruit from free hostel breakfasts; obviously none of us had that type of cash on us. We told them we only had enough to pay the cost of three fares. Thus the dilemma began: the officers couldn’t just ticket us, because we would obviously skip the country without paying. We made lots of helpful suggestions – they could take us in their cars to an ATM and we would withdraw the cash, or maybe they could take one of our passports and we would come to the station tomorrow to pay the fines to get the passport back?
The police officers didn’t like those suggestions. They liked handcuffs and the idea of three little blonde travellers in a damp cell. They told us we would have to go with them to the station, then call for someone to come and bail us out. Desperation set in.

I tried guilt tripping them about their wayward pursuit of justice: “I thought policemen were supposed to serve and protect. Who are you serving? WHO ARE YOU PROTECTING?” My friend had a slightly different tactic: “What’s your name? Mark? I’m Ellen. It’s lovely to meet you. Those are nice shoes, Mark. I love your pants!”
None of it worked – they just looked at us like we were a little crazy. I don’t think they spoke much English. In the end, I think they just got bored with us and our babbling. They took forty euros from the combined small change we had at the bottom of our bags, and called it a night. They got off at the next stop and we continued our free ride all the way back to Old Town.
It was only after we were safely off the tram and walking to our hostel that my friend Genna opened her passport and pulled out several hundred euros, in notes. It was her emergency stash. The police officers had been holding all the money they needed for their bogus fines in their own hands the whole time. That’s real justice, bitches. During Study Abroad, weekends are a constant stream of travel adventures and epic parties. From downing steins in a beer tent at Oktoberfest to partying under the stars on a…