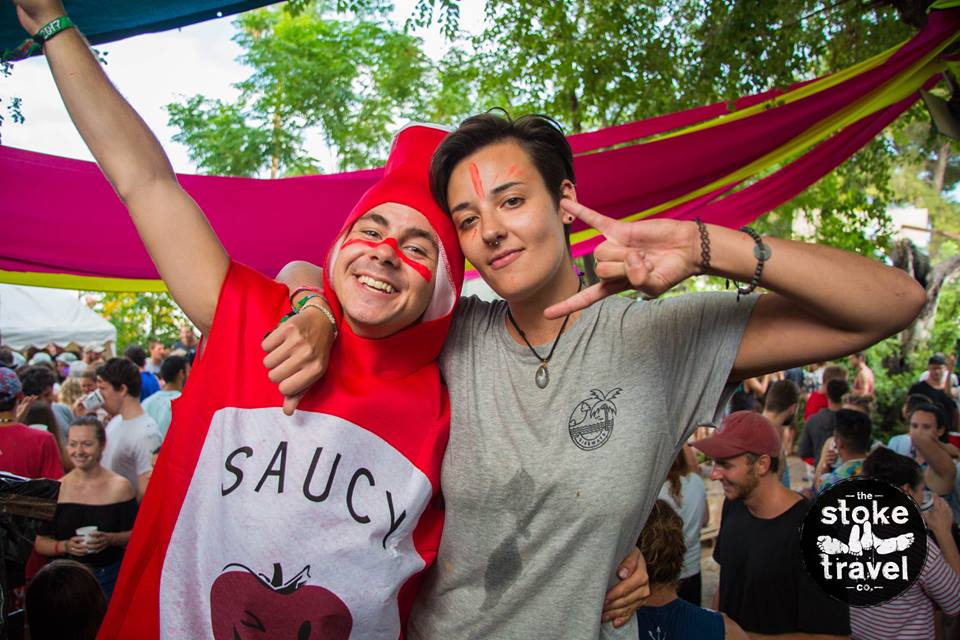 How to find the perfect gift for your travel buddy.

‘Tis the season to be awkward, to awkwardly give and receive gifts. Receiving terrible gifts is an easy awkward, a smile and a forced thank you, followed by an insistence that you will indeed wear it, before banishing the offending gift to the back of your cupboard. Giving sub-par gifts, however, isn’t something that is so easily shirked off, and the shame of an ill-thought-out Christmas present could follow you around for at least another year, maybe more.

That’s why choosing the perfect gift for your travel buddy is the most important thing you’ll do this silly season. Get it wrong and you could be about to spend a lot of time with somebody you’ve recently disappointed, somebody whose low opinion of you could very easily compromise your travelling happiness. Get it right and you might be able to subtly manipulate your compadres behaviour through your shrewd generosity. But what do you get them? What do you get your fiance of fun, your partner of pleasure? Well, depends on what kind of traveller they are.

The Party Animal seems to have an unbreakable stamina when it comes to raging. They’re consistently the last person back to the hostel and the first to crack a beer the next day. The Party Animal is an expert at making new best friends every night and then forgetting all about them by the morning. As a matter of fact, the Party Animal forgets about nearly everything the next day, which is good for them, as remembering all the embarrassing things they do might buckle them into a forever cringe, twisting them in the middle so they’re permanently bent over like the Hunchback of Not-Again.

Gift ideas: well, you’re always going to wake up before them, so maybe when you do just give them a swift punch in the head and make sure those pesky brain cells know who’s boss. That would be a nice present, or maybe get them a ticket on our 24-hours of madness, Hogmanay New Year’s Eve trip, where forgettable behaviour is standard issue, and even the biggest of party animals will look like a lightweight compared to the Scottish locals.

Oh the Thrillseeker, the goddamn energy-drink bleeding ball of energy that is the Thrillseeker, never content to kick back and chill, take in the sights, instead always wanting to hang-glide off this, or abseil into that, or rollerblade in the bar, or any other manner of extreme pastimes that are intended to make you feel bad about your inaction, but really just make you feel sorry for how lame this pal is. The Thrillseeker is always telling you how Adrenaline is their drug, and right now they’re fucked up, and there’s no I in fear, and if you’re not on the edge you’re taking up too much space, but you just wish they’d drop it back a gear and shut the eff up.

Gift ideas: slip a six pack of Red Bull into their tea, put them in a shopping trolley and push them down the stairs of your hostel — the thrill that they’ve been seeking will hit them in the third eye like a gumboot full of crack cocaine to the gums and will scare them forever out of this silly obsession with pushing the limits. Or, perhaps a trip to the Running of the Bulls 2019 will show them just how partying is so much cooler than thrillseeking, as we pay less attention to putting ourselves in harm’s way from animals, and more into becoming animals of the party.

Oh lover lover, mmm, they call this travel buddy Mr, or Miss, or Mrs, or Dr Boombastic, because they really think they’re fantastic when it comes to wooing members of whichever sex(es) they fancy. This self-proclaimed lothario is a real pain in the ass to travel with, forever chasing down whichever object of their affection had the misfortune of walking into the bar, crossing the street, being born — ditching all of your loosely-laid plans of having a goodtime together, seeing some sights, sampling some delicacies and then, after your diet of hearty laughs has been satisfied, perhaps encouraging some strangers to share your bed with you. No, the Casanova sees carnal knowledge as a mission that begins in your sleep and finishes when you’re not sleeping alone, and boy can that get tiresome.

Gift ideas: freeze a dog poo, put it in a condom, and slip it into their back pocket when you’re out and about. As the day progresses the poop will melt, and they will emanate an unbearable and undetectable stink, which will shut down any and all cockiness and render your overly cocksure chum an ineffective cocksagger for the rest of the trip. Or, bring them to Oktoberfest 2019, where we’re expecting more than 8000 travellers net year, more than enough people for them to try and hit on, while you find some much better friends.

The Sponge always wants a bite of your sandwich. The Sponge constantly forgets to bring their wallet to the bar. The Sponge remembers when they spotted you that 5¢ for an ice cream, but have conveniently forgotten that they haven’t chipped in for beach-drinking bottles of vino since you first rocked up in Barcelona. The Sponge is a take, take, take kinda guy, one of those travellers with short arms and deep pockets, the kind of person who will return from their time abroad with more money than they went away with. Fuck the Sponge.

Gift ideas: get a fake ID made up with your face and their details and then embark on a campaign of utter shittery, making a menace of yourself around the world, racking up an incredible, crippling bill of fines in their name, effectively crippling them for the term of their natural lives. OR, introduce them to any of Stoke Travel trips, like the Ibiza Beach Camp, or the San Sebastian Surf Camp, where everything is covered, food included, as a part of our all-inclusive packages. Kill them with kindness, and then when they least expect it smack ‘em right in the kisser with your left-jab of generosity.

Oh Logistician, give it a break. Give it a break from your constant penciling in of schedules, your relentless setting of alarms, your borderline breakdowns when the plans that you, and only you, made went awry due to the, completely justifiable, hedonistic tardiness of your compadres. The Logistician treats travelling as a way to alleviate the chaos in their accounting day job, an orderly break from the psyche-shattering maelstrom that is their home life of meal preparation, throw pillows and missionary position. The Logistician is constantly on the verge of a massive nervous breakdown and tries to pull you into one too by making sure that your every travelling moment is a nightmare of missed connections, trusting nobody and recounting your €3.75 change 86 times.

Gift ideas: a prostitute, a really decent prostitute who will love the neurosis out of them in under 30 minutes. Or, bring them along to Las Fallas, the festival where Spanish artists build beautifully elaborate statues and then burn them to the ground, a reminder that nothing is permanent, and therefore nothing matters, so, you know, just fucking let it go, maaaaaaan.

Oh you’d take a bullet for this one, that’s for sure. This travel buddy makes travelling a breeze. They’ll go along with your plans as well as suggesting their own when you’re stuck for ideas. They’ll happily split a bill straight down the middle, even if you had the goddamn lobster and they were on the Caesar salad. The Inseparable Bestie fills long bus rides with laughter, and acts as a wing (wo)man when you need one, and as a cock (booty) blocker when you really, really need one. The Inseparable Bestie is your soulmate, the rare human who can survive a long trip with you and have the relationship emerge not only unscathed, but powered up. The Inseparable Bestie might start the journey as a relative stranger, but by the end will hold your hair back while your Montezuma’s revenge has you double ending into the bowl and bidet. The Inseparable Bestie thinks the world of you, and so they deserve it in return.

Gift ideas: their hand in marriage, a house next to yours, a million bucks, or the Stoke Travel Passport, for a summer of amazing parties and trips across Europe, taking in the biggest, best and wildest festivals as well as the most amazing destinations.

We hoped that helped! What’s the worst gift you’ve ever received? Light it up in the comments.