The Boozeletter: Tomato, is it a Fruit or Vegetable? 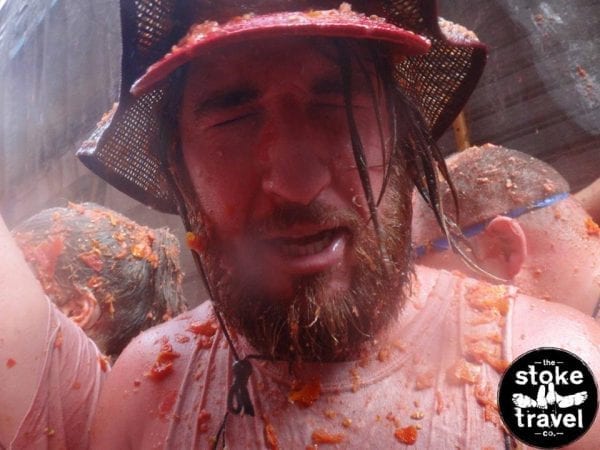 The question is: tomato: fruit or vegetable? They say that the world is divided between those who say tomató and others who say tomáto, but that point of difference barely registers when compared to the eternal debate over whether said tomato falls under the genus of fruits, or is of the vegetable species. It’s a little known factoid, but this schism is what separated the Protestants from the Catholics, fired up the Boer War and was probably why your friend’s parents split up. This is the one issue that you cannot fence-sit on; you have to make a call and you have to stand by it, fight for it, until your opponents yield to your opinion, or you die a dead death (metaphorically, ideologically and socially).

Obviously it is this divide that was the inspiration behind, and propagator of, the tomato battle that provides the centrepiece for the La Tomatina party festival.

Most attendees don’t know that they are participants in the latest frontline of this ancient war. They do not know that everyone that feels the wrath of their cannon tomatoes are actually sworn enemies forged along this unspannable scientific chasm.

But you, dear Stokie, will know where you stand and as such when it is you hurling the tomatoes you will be sure that you are inflicting your squishy wrath on someone who is absolutely incorrect and thereby deserves the ketchupy humiliation. Here’s our guide for you to determine which side you’re on.

Tomato is a fruit

The term monster is thrown around too liberally these days, but you surely are the love child of Frankenstein and whoever is responsible for Big Bang Theory. You probably reek of something, most likely sulfur and it’s highly likely that if you do cast a shadow, which you probably don’t, it would be making faces at you behind your back. If you believe that tomatoes are fruits then why don’t you add them to fruit salads? Why don’t you pluck a tomato straight from the vine and chow down on it as a refreshing summer snack? Why don’t you buy a bottle of tomato schnapps and enjoy a tasty after-meal digestif? Because it would be horrendous, that’s why, and fruit is only described as horrendous by horrible infants whose only hope for the future is to live out their days sorting trash into edible and inedible piles and eating the former and feeding the latter to endangered pandas just to make them sick and not in the mood to breed. You goddamn animal.

And yeah, we know that science says that tomato is a fruit, but in this case science is wrong because fruits never taste savoury, fruits are sweet and so go suck on a lemon*, science.

Tomato is a vegetable

Look at you you wonder child, ascending from the heavens on the back of some magical, golden, winged tomato-vegetable-chariot-of-the-gods. You’re the kind of guy or girl who was immensely popular in high school, like head cheerleader type popular, who left school and moved to New York and made it in the amateur drama world, even starring in a few off-Broadway plays, while you were at college before finishing your degree in engineering and using your acquired knowledge and potential to make millions to work pro bono providing clean drinking water to the developing world — in short, an absolute legend of a great guy and even better gal, and the kind of person we’d love to take for dinner including after-supper gin and tonics.

So there you have it, and now you know. This year when you join Stoke Travel at La Tomatina you will find yourself empowered by the knowledge that you are hurling vegetables at disgusting tomatoes-are-a-fruit thinkers.

La Tomatina is just around the corner, and Stoke Travel have the best warriors to march into battle with, as well as the greatest off-Tomatina fun and games: campsite parties, swimming pool, walk from the beach, DJs, open bar, meals included and optional Water and Wine festival, and La Tomatina after party.

*A lemon isn’t a fruit, either, it’s a citrus, full stop.

And the party doesn’t have to end there! Wanna surf? Come surfing with us in San Sebastian! You into boat parties and the sun and the beach? Obviously. Come hang out with us in Ibiza! Like beer and boobs and german food? Of course you do. Get your Stokie butt over to Oktoberfest with us! Fuck it, score a Stoke Passport and you can do all four but you’ll only have to pay for three of them! INSANITY!