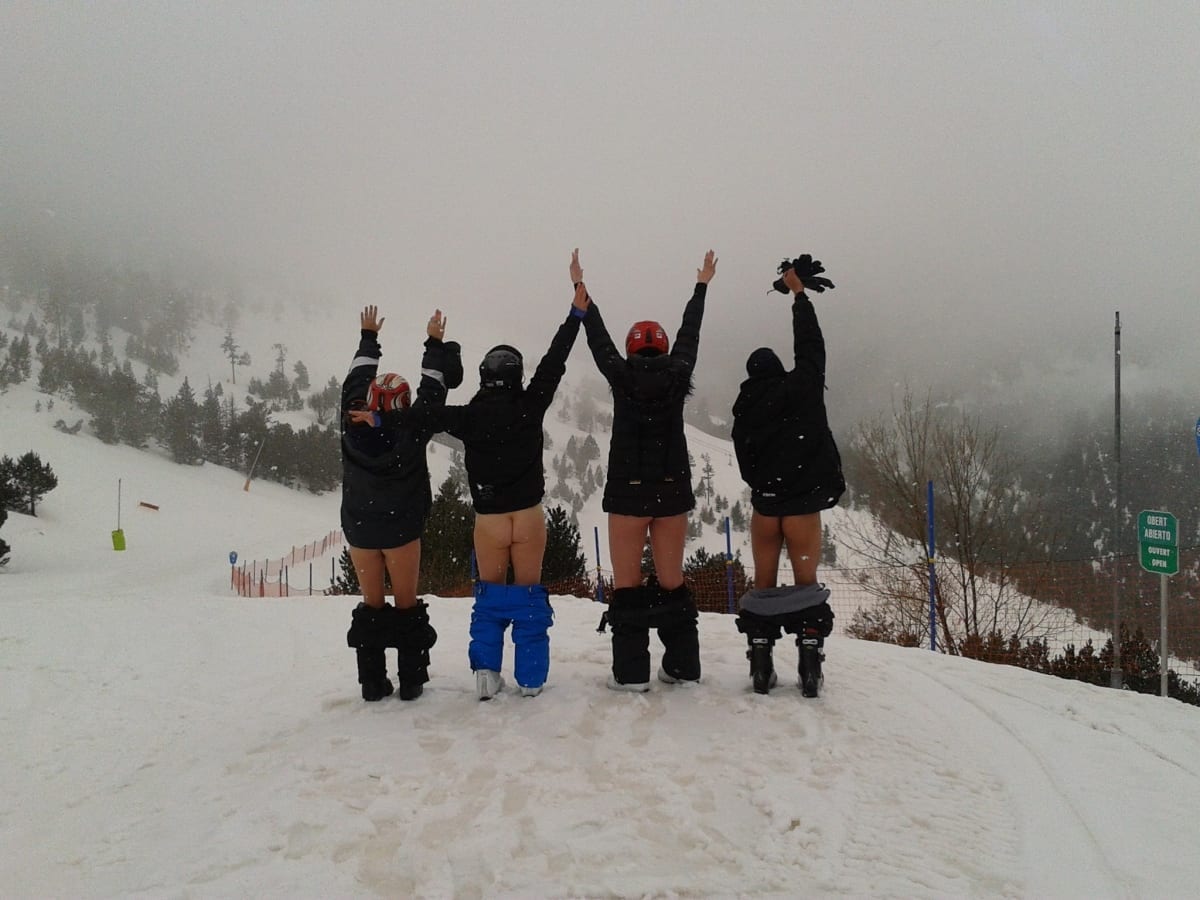 For sure you already know about our Andorra Ski Weekender, duh, but you’re probably scratching your dome wondering just what in the W-T heck even is an Andorra, what’s it got to do with skiing and snowboarding, and however can you get your hands on it. Well, freshen up your Andorran knowledge with this handy little cheat sheet.

The tiny principality nestled in the Pyrenees mountains between Spain and France. It’s about 40 kilometers across Andorra and it’s population is around 80,000, which makes it the 16th smallest country in the world by landmass, and 11th by population, smashing fellow European featherweights like San Marino and Liechtenstein.

Andorra isn’t in the European Union

When you go to Andorra you’ll be leaving Europe, even though you’re still absolutely within Europe. You’ll be outside the Schengen Zone, meaning that you won’t use up days on your tourist visa while you’re there (and if you need to get out of Europe before you go over your 90 days, it’s a good place to hang for a while). There’s no real border when you enter or leave Andorra, although customs agents from Spain or France might stop you to search your car for cigarettes.

Because Andorra is in the middle of the mountains, not much of the land is farmable, something like 2%. But on that 2% they grow a lot of high-quality tobacco, of all things, because when you don’t have much land to farm, farming tobacco seems like a really good idea.

Cigarettes are cheap in Andorra

Andorra is a tax-haven attracting wealthy European’s with its low-tax rates. This means that there is little government add-on to the cigarette price, making them considerably cheaper than in neighbouring France and Spain. Because of this many Europeans go to Andorra to buy cigarettes in bulk so that they can drive them to their countries and puff away on less costly cancer sticks, hence the border searches. The tobacco companies, evil lot that they are, know this and in 1997 supplied the tiny principality with 3.1 billion cigarettes, or seven packs a day for every man, woman and Andorran child.

So Andorra is a principality, which means it has a prince, but in the case of this crazy little nation it has two princes, one who is the president of France and the other is the Urgell bishop, who is the head of a small Catholic diocese taking in Andorra, as well as parts of northwest Catalunya. Nowhere else has two princes, nowhere has a prince who is the democratically elected head of another nation. What does this mean for your visit to Andorra? Nothing, but it does mean that you’ve got some pretty boring trivia to tell your friends.

There’s almost no crime in Andorra

Next to no violent crime, or street crime, 43 people in its jail — for mostly drug offences or shoplifting, 700 years of neutrality and non-participation in global conflict, only two roads into the nation that are monitored by customs agents 24-7, with drug sniffing dogs. Given its tax-haven status the nation probably attracts a lot of dubious tax-avoiding individuals from around Europe, but white-collar crime isn’t real crime, is it? (It totally is, but it doesn’t make Andorra a dangerous nation).

There are bears in Andorra

There are bears and wolves in Andorra. There are a handful of bears that roam the Pyrenees between France, Spain and indeed Andorra, the result of a reintroduction program since the big furry legends were made extinct. The bears are the offspring of three Slovenian bears released in the Pyrenees in 2006 and now number around 40, which means that they’re all inbred cousin bears making out with each other. Wolves, on the other hand, made their own way into Andorra from Spain and probably aren’t cousins, although if they are it means they’re choosing to bang their kin, which is pretty wild, just like we’d expect wolves to be.

The country is basically shopping malls and mountains. That’s what you’ll notice when you enter Andorra, that the valleys are full with ugly shopping centres, the legacy of having little tax, cheap consumer goods, and no shortage of tourists who want to buy it. The mountains are spectacular and beautiful, because it’s damn difficult to build shopping malls on mountain tops, although we wouldn’t put it past the Andorrans to try it.

There are 98 ski lifts in Andorra. Maybe more, maybe less, that number is kind of a guess. There are a lot of ski lifts for how small it is, and many lift tickets allow you to visit multiple mountains, some of them connected by big-ass gondolas, which is radical. Our Andorra Ski Trips go to the Vallnord ski area, which allows us to ski the mountains of Pal-Arinsal or Ordino-Arcalis, connected by, you guessed it, a dang radical gondola ride. The combined resorts have 43 lifts, covering more than 90 kilometres of skiing trails, with a maximum altitude of 2600 metres.

The Stoke Travel Andorra Ski Weekender is the best way, by far, to visit the tax-free, tobacco producing, low crime, dual principality, alongside bears and shopping malls. This trip leaves  Barcelona on Friday morning, allowing us maximum time up on the mountains, plus we stay on the mountain side next to the gondola and the best apr`es-ski bar, as opposed to in the city of Andorra la Vella, which is essentially mountainside anyway, because this is Andorra and everything is mountainside. Anyway, we leave Barcelona at 11am on Fridays January 27th, February 10th and 24th and March 10th, returning Sunday evening (if you have to fly back that night, book a late flight).

So now you’re an expert on all things Andorra, all you have to do is go and check the place out for yourself. Are you ready? Reserve your place now on an Andorra snow trip. And for more Andorra information, check out our comprehensive destination guide.