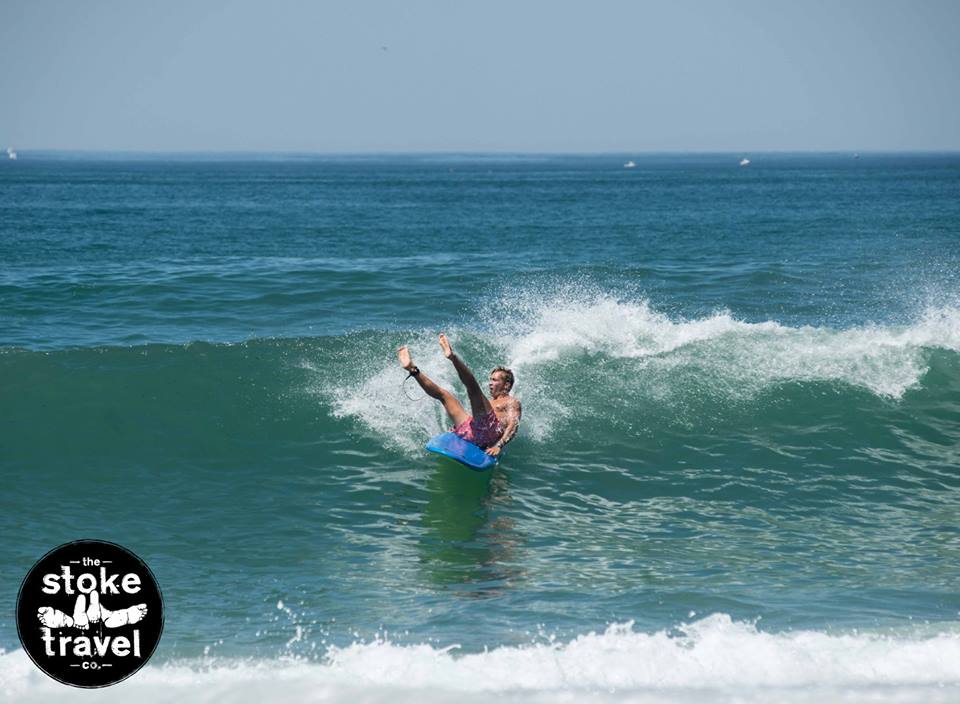 Novice surfer, Peter Cooley, 26, has returned from a second stint at surf camp and is attempting to pass himself off as a big deal in the waves.

Cooley’s friend, Tom Jenkins, explains. “It started off innocent enough. He had a bit of a tan and his hair was lighter (we suspected he was squeezing lemon juice in it), but then he started wearing nothing but Hawaiian shirts, and this weird pukka shell necklace, so we knew he was trying to tell us something, you know? Then we were down the pub and some surfing came on the news, a contest in Hawaii or something, and the waves looked big and dangerous, and Pete starts calling the waves ‘sick’, talking about how he ‘misses getting pitted’ and how if he was there he would have ‘gotten shacked out of his mind’. I mean, I don’t know anything about surfing, but the guy’s surfed for two weeks total, max, in his entire life.”

It would appear that not only was Cooley trying to deceive his friends who had yet to surf with his talking up of his prowess, but it seemed like he’d almost believed it himself. “I mean, we love the guy so of course we called him on it,” continued Jenkins, “but he was sticking to his story. It’s like he really believed that he was capable of conquering the world’s most dangerous waves after a grand total of 20 hours learning the sport. At one point the news showed a particularly painful looking fall, and Pete started calling the guy a ‘kook’ and insisting that he would have ‘pig dogged’ his way through that wave. What even is a pig dog, I mean, to do with surfing?”

Cooley’s parents spoke of their son returning a stranger, a guy who spoke of having “saltwater in his veins” and who was found face down in the bathtub, only to be furious when his father pulled him out. “Petey said, ‘What are you doing Dad, you barney? I’m training to hold my breath for when the surf gets maxxed out,’ and in my bloody tub, no less!” said his mother, who was more confused than distraught.

We asked the younger Cooley about his newfound status as a shredlord and can confirm that it is worse than it previously anybody had anticipated. “Ah man, those kooks just don’t get it,” he complained. “Once you’ve been in the green room everything changes, bro. It’s like, you’re at one with nature, just standing there in mother nature’s womb, man. It’s so sick. I don’t feel myself anymore unless I’m near the ocean. I need to hear the roar of waves smashing on the sand to get to sleep and now I know that a bad day surfing is better than the best day working.

“My friends do drugs, but not me man, surfing is my drug and just thinking about it makes me off my face!”, he claims, in a terribly cringeworthy statement that will doubtlessly offer his parents a reason to feel releived.

We asked if that meant he’d be leaving his job and taking up surfing fulltime, but Cooley was ddismissive, because, “Ah, my boss just made me shift supervisor, man, so it’s such a good opportunity for me, plus i’m making another $50 a month now, so that will go straight into my tube fund. He’s told me to stop asking customers how the waves were, because I guess we are eight hours from the nearest coastline and they probably just want to get a barbeque chicken and get out of here, but you never know. There’s nothing sicker than meeting a fellow surfer and chatting about the swell, you know?”

Staff at the surf camp refused to confirm Cooley’s skill level in the surf, saying only that he was a “good guy,” but admitting that he was also “a bit of a frother,” and sometimes that can be somewhat of a “bummer”.

Do you want to be a red-hot surfer but have maybe left your run a little late? Never fear, the Stoke Travel San Sebastian Surf Camp is great for all levels of surfer, so even first timers can get photographic proof that they are now masters of the waves.

When will we get back to normal after the lockdowns lift and social isolation only applies to when you’re hungover? Anything you read about the state of travel – in…

If you’re searching for information on the late 90s Tobey Maguire Oscar-winning film, then I’m afraid you’ll have to look elsewhere. But if you’re wanting to find out what exactly…