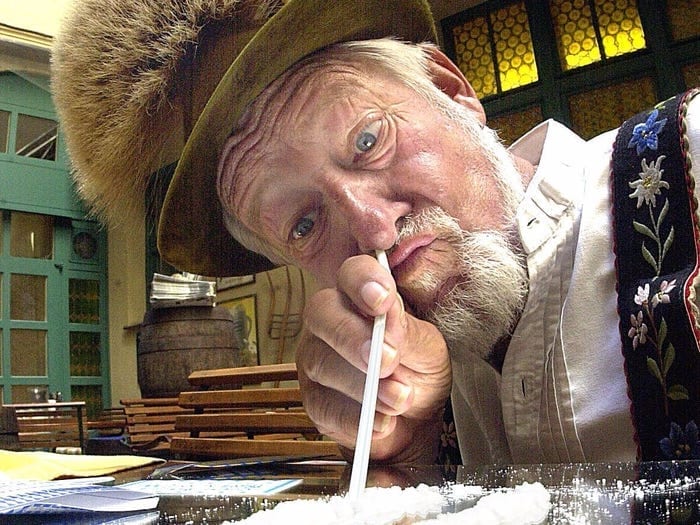 While we don’t recommend doing drugs at Oktoberfest, we do recommend having as much fun as is physically possible, and to help with that we’re opening our bar to you – with unlimited beer and sangria – as well as hosting DJs and live bands every night. Check out our Oktoberfest packages for the biggest parties outside of the beer halls.

No. No you can’t, legally. Unless you count beer as a drug, in which case yes. Yes you most certainly can do the drug called beer and it’s friend Jagermeister at Oktoberfest 2023. The problem with doing drugs at Oktoberfest is that you’re really really not allowed to. It’s super illegal to do drugs that aren’t beer in Germany, and they’re especially vigilant on patrolling the festival itself and all of the entry points for people with drugs; there are random sniffer dog stops, they can do a piss test on you whenever they want to, and if you’re caught with drugs in your system the German polizei will give you a hard time, a big-ass fine, and you’ll stay on their druggo database so they can harass you for the foreseeable future.

None of this is very desirable.

That said, sometimes people want to do drugs at Munich’s Oktoberfest. We say, No you shouldn’t, and they say, Well eff you, I’m going to do it anyway. And you know why that is? Because Oktoberfest is on planet earth, and it’s a really good time, and when people are having a really good time on planet earth sometimes they’re going to do drugs. What we’re saying is, it’s kind of inevitable.

Can you smoke cigarettes at Oktoberfest?

BEWARE: smoking when you’re on the other side of the shitfaced threshold will give you seasickness and that could be morbid in a crowded, hectic, already heaving place like Oktoberfest.

Can you drink alcohol at Oktoberfest?

Der. While most of life’s celebrations include alcohol, this is one that is explicitly and shamelessly based around it. They serve seven million litres of beer at Oktoberfest (for seven million mouths, which is nothing compared to the 60,000 litres we serve to our 8,000 or so guests at our Stoketoberfest open bar), plus wine to the weirdos who can’t just stop being so sophisticate’ while they’re at the world’s biggest beer festival. People generally drink about three-four litres of beer in the beer halls, which makes the sevel-mil for seven-mil stat so weird, but anyway. People drink their beer, they drink other people’s beer, we’ve even seen them drink beer-laced vomit and steins of piss, so yeah you can imagine how much beer is being consumed here. It’s so wild that in a nation so anti-drug that this wanton piss up not only happens, but is replicated on an almost daily basis in beer gardens and restaurants and homes and petrol stations around the country. You can also drink Jagermeister and other shots, and some of the little bars outside the beer halls even serve harder shit, because yeah sure you totally need that.

BEWARE: if you’re in the beer halls for the morning session the security guards will use your inebriation as an excuse to eject you. This is less because they have a problem with intoxicated people – it’s literally the spine of their event – and more because they’ve done the math and you’re not able to physically drink any more and they want to free up some space for the thirsty afternoon arrivals.

Can you smoke weed at Oktoberfest?

Why would you want to? Why would you want to lower your energy, increase your paranoia, and increase your appetite in what might be the most expensive food court in Europe? Plus, every time we’ve ever smoked weed after drinking we’ve ended up feeling like we’re floating in a dingy during a North Sea storm; it’s a surefire way to green out. BUT we get it that some of you modern-day Bob Marlettes like a bit of wacky tabbacky to go with your festivities, and so you might want to blaze up in the beer halls. But you can’t! It is still illegal in Germany to smoke the devils’ lettuce and you will get harassed by the cops. That said, having a small amount on you isn’t enough to be prosecuted, so if you can’t last a few days without your sticky icky icky make sure you don’t carry around a trafficable quantity, let’s say less than six grams.

BEWARE: just because you won’t be prosecuted for having a small amount doesn’t mean the sniffer dogs won’t go for you, to po-po won’t stop you, piss test you, detain you a while, confiscate your weed, maybe fine you, etc. If you need to smoke, just wait until you’re back at the Oktoberfest campsite.

COST: honestly not a lot, until those munchies kick in.

Can you take pills at Oktoberfest?

If they’re prescription, yes you can. But there aren’t many prescription pills that you can confidently take while drinking copious amounts of alcohol. We’re not doctors, but we heard from one, or someone who had spoken to someone who had spoken to a doctor, that the reason why you shouldn’t drink when you take antibiotics isn’t because it’s dangerous, but because the booze lowers the efficacy of the drugs and ruins the full course. But yeah, if it’s safe to take your pills when drinking then you can totally take them, unless you’re talking about those other types of pills, which you most definitely cannot take at Oktoberfest, but geez louise they’d be fun!

BEWARE: while there’s quite the pill culture in Berlin’s techno clubs, and you’re less likely to be stopped and searched, or punished coming out of the Berghain, Munich in general, and Oktoberfest in particular, is a different story. This is billed as a family event, despite the copious amounts of booze consumed, and so drug laws are applied to the letter. Taking half a pill and dancing on tables sounds like a swell idea, but it comes with great risks and maybe even greater consequences.

Have you heard about Oktoberfest Cocaine?

Despite the videos you’ve seen of people doing cocaine at Oktoberfest, you can’t do cocaine at Oktoberfest. The Oktoberfest white powder people are snorting off the backs of their hands, or off the beer tables, is Wiesen Kok, which translates to Wiesen (the Oktoberfest fairgrounds) coke. It’s little more than sugar with a little menthol flavour, or something, and really does nothing more than clear your nose maybe. So yeah, while you may see a bunch of videos of what seems like revellers racking up with impunity, they’re just playing coke head, not actually being one. Now, cocaine, the real stuff, is illegal and even if you did it a few days before, if it shows in your peepee test you’re in big trouble. So while it might be just what you need to sober up a bit and talk someone’s ear off, it can land you in big trouble.
BEWARE: we can’t help but think, though, that the proliferation of fake coke presents an opportunity to put the real deal in Weisen Kok bottles and do beer-hall bumps with impunity… but as everyone generally shares the fake stuff, just be prepared for a local granny to ask you for a line.
COST: more than Spain, less than Australia.

Can you do LSD or take shrooms at Oktoberfest?

Really couldn’t think of anywhere worse to be tripping. Seriously. It’s such an intense environment, with all the people vibrating at super drunk frequencies and bumping into you and getting in your face, and then there’s the law that puts LSD on the same level as heroin in Germany, meaning that if you’re tripping out hard and losing your shit you would probably be too scared to tell the authorities what’s up and that would make it infinitely worse. If you are a confident mind-bender then you can do what a friend of ours allegedly did: put a droplet of LSD in the bottom corner of certain pages of the book he was reading. Then when he wanted to get high he’d just cut out the corner of page 36 and away he’d fly.

BEWARE: hallucinogens need to be treated differently to party drugs. They can really mess with your upstairs mix-up.

Can you do meth or speed at Oktoberfest?

We’ve seen some people who would probably benefit from this, but again no you cannot, because you just can’t. While it is the drug of choice for many of Germany’s clubbers, there’s no point taking amphetamines at Oktoberfest because it’s not an all-night deal. If you’re not on your way home by midnight you’re going to be in those big old fairgrounds all alone. Doing speed or meth at Oktoberfest would just crank your pestiness up to unneeded levels, both in the beer halls and then back at the campsite when everyone is trying to sleep. Anyways, meth should really be on your list of never-do drugs, no good has ever come from being a meth head except for those wonderful Facebook rants that the methin’ around crew go on sometimes. Man, they’re so horny.

Can you do heroin at Oktoberfest?

What? Why would you want to? What is this? No you can’t do heroin at Oktoberfest. Jesus some people.

And there you have it, all the drugs you can’t do at Oktoberfest. Normally we’d say enjoy, but you shouldn’t enjoy any of these except for beer, and even then in moderation. Really excessive moderation. Also, stay at our Oktoberfest campsite for an all-inclusive experience, the best parties outside the beer halls, and an open bar. Check out our Oktoberfest packages here.