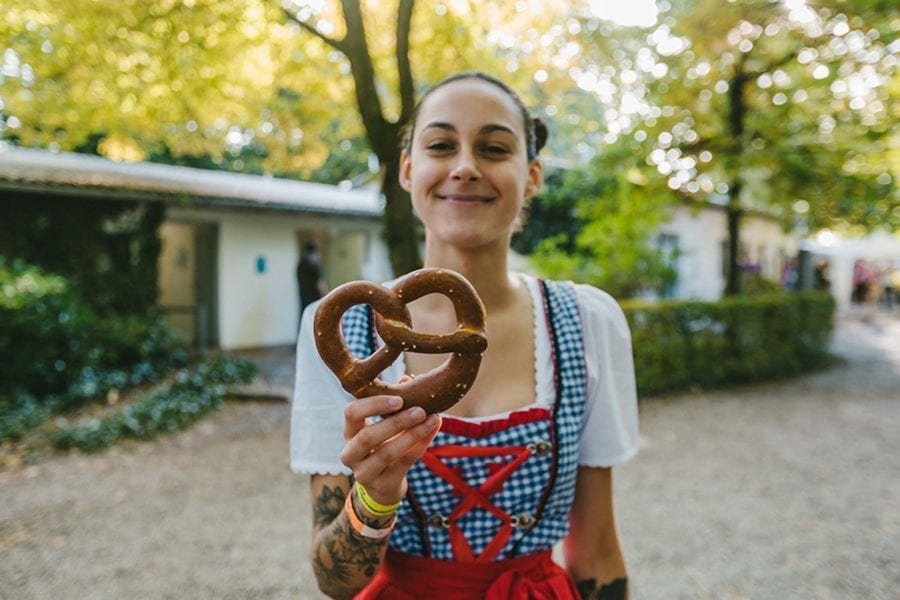 Six reasons why travelling solo to Munich’s Oktoberfest is an awesome idea.

It’s on your bucket list, but for some reason you can’t convince the homies to join you at Oktoberfest 2023. They have their reasons – they’re not available at all for the last two weeks of September and first week of October; they’re not interested in drinking the world’s best beer and dancing on beer hall tables; they’ve already been and they don’t want to go again – and you know that all those reasons are bullshit! Nevertheless, you’ve exhausted all of your avenues to convince them, from pleading to blackmail to bribery, and still nobody is up to the challenge, so you ask yourself, can I travel to Oktoberfest alone?

Well, the answer is absolutely yes, you dummy, you can travel to Oktoberfest alone, and furthermore you’re going to have more fun by yourself then you would with those wet mops anyway. Here’s a few reasons why you should hit up Oktoberfest as a solo traveller.

Everybody is best friends in the beer halls

From the moment you step inside the Oktoberfest beer halls you are immediately surrounded by 10s of 1000s of potential new best friends. From the grumpy old locals, to the awestruck tourists, everybody in the beer halls is there to drink beer, and be merry, and it’s common knowledge that beer drinking and merrymaking are two pastimes that are best done in company. At Oktoberfest you can’t get served a beer unless you’re sitting at a table, and when you’re in a group that can be tough – it’s a lot easier to squeeze onto a packed table if you’re alone, than if you were with seven other thirsty travellers. So you sit down, you order a beer, you cheers your new table mates, and from that moment on you are the best of friends. It’s really that easy.

But I’m socially awkward, you cry. Don’t worry, you won’t have any qualms with asking for a space to order a beer, or sparking up a conversation, once the first few gulps of Oktoberfest’s extra delicious, super strong, beer has passed by your lips and started its way to making your hips sway to the oompah bands. This beer is delicious, it will rock you, and it comes by the litre. What more do you need to shake the inhibitions away? Learn more about Oktoberfest beers and the Oktoberfest beer percentage (it’s a lot) here.

You would have lost your friends anyway

Now you see them, now you don’t. As soon as you leave to go to the toilet, stop to talk to a friendly, but foreign, face, or stand up on the table to dance, you’ll lose your friends guaranteed. Then you’ll just spend the rest of your day trying to find them again, so the bigger your group, the more opportunities to lose people, the more time you’ll spend trying to find them again. We recommend that you travel solo, so that you can just completely discard of this inevitability and think only about numero uno. Here are some more tips for surviving the Oktoberfest beer halls.

But made new ones

See points one and two, above.

Stoketoberfest is Stoke Travel’s Oktoberfest campsite accommodation and party located inside Munich. It’s a short metro ride from the beer halls, and is both the cheapest Oktoberfest stay and the most enjoyable – which is why we host more travellers than anybody else in Munich, up to 2000 on a weekend night. In a group this big you’re bound to find your people, the people you want to drink with, laugh alongside of, to egg on, and maybe even to make out with. In addition to simply being the biggest group of young travellers at Oktoberfest, Stoketoberfest is also designed around creating a social atmosphere, from our open beer and sangria bar, to the dance floor with bands and DJs playing every night, the beer pong and flip cup tournaments and the infamous Wheel of Misfortune – Stoketoberfest is created around making the travellers a part of the spectacle, pulling you out of your shell and forcing you to mingle with like-minded travellers, study abroad students, backpackers, expats and beer lovers from all over the world.

Trust us, come to Stoketoberfest as a solo traveller and leave with a whole bunch of new best friends, and maybe lovers, from all over the world.

Solo travelling around Europe is the best anyway

You can go where you want, when you want. You are forced to step outside of your comfort zone and spark up conversations with strangers. You don’t have to deal with anybody else’s travel hangups, anxieties, fears, or suspicions. You’re completely free and able to do whatever you want, eat whatever you want, get as drunk or not drunk as you want, kiss whoever you feel like kissing and have nobody around to either judge you, or to report back to your friends and at home. It’s not just Oktoberfest that is perfect for solo travelling, it’s all of Europe.

So if you find yourself travelling alone and can’t find anybody to accompany you at Oktoberfest, don’t worry, we’ve got literally 1000s of drinking buddies waiting for you at Stoketoberfest, check out our Oktoberfest packages here.