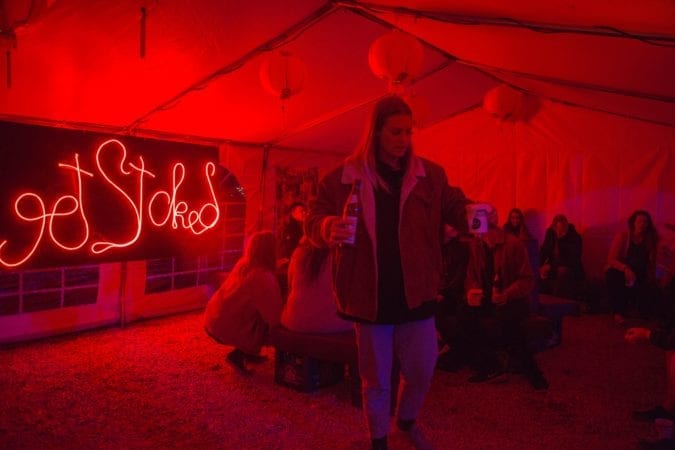 Oktoberfest 2023 and all of its lederhosen clad, liver swelling antics are almost upon us! And while we’re wrapt at the prospect of prosting in the beer halls again, the unreasonable rise in hostel, hotel and Airbnb prices means that we’ll most likely, yet again spend another Oktoberfest camping in a Stoke Travel Stoketoberfest tent.

You know the tents, the infamously flimsy, leaky, tents. The tents that find themselves plonked a mere three NOT soundproof feet from your neighbours on either side, making you bear witness to the nocturnal rumblings of some of the world’s drunkest people (and believe you me, flatulence is the worst of your worries). But never fear, because if you don’t like the idea of camping we always have glamping, or if you can’t afford glamping here are five things that’ll make you worry not one little bit about where you’ll be resting your spinning head.

Aleman ale and its adherence to four-ingredient purity laws is the lord’s work in action. Not only does it give you little-to-no hangover, but the strength to drinkability ratio is such that you’ll find yourself atop drinking bench and professing your undying love for a beer wench about halfway down your first litre of bier. Really, there’s nothing that will take your mind off a night spent dipping in and out of slumber, listening to the pillow talk of your literally 1000s of cohabiters, than a maß or two of perfect German beer, slugged in a beer hall filled with 10s of 1000s of fellow boozehounds.

The beauty of the beerfest lies not only in the delights of its drops, but in the stupid, smiling faces of the hordes with whom you’re imbibing. In the beer halls you’ll find yourself surrounded by the best people humanity has to offer – happy drunks, arm in arm, singing along to the oompah bands and their drinking shanties, opening their arms to absolute strangers and inviting them to bathe in the glory that is Oktoberfest. And yeah, before you crawl into your nylon cave of a night, the campsite parties replicate that international, gregarious spirit, just a little bit… less inhibited.

From the aforementioned rotunda-mounted beer bands in the beer halls, to concerts across Munich, and world-class bands and DJs playing at the Oktoberfest afterparties in your very own campsite – the aural ambience of Oktoberfest provides the perfect accompaniment to your drunken dance moves. Your morning pre-parties in the campsite will be soundtracked to music meant to get you into the mood. The beerfest itself is a boozy singalong without compare, and then when you stumble home the afterparties at the campsite feature bands and DJs from Germany, Europe, Australia and around the world – and it’s all free of charge. Stumble out of your nylon dome home and into maybe the best party of your life, all just a step outside your tent zipper.

More than simply a wonton knees up, Oktoberfest is also a world-class food festival, with Bavarian beer on offer at all hours of the day, enticing gourmands and gut-liners alike. We insist that you try the pork knuckle, the roast chook, bratwurst and sauerkraut, pretzels, and even the radishes. We insist that you drink your body weight in beer and then devour all of these unbearably tasty treats before mounting one of the gut-wrenching rides that proliferate this very adult Disneyland. Oh, and hearty breakfasts and beer-soaking dinners are included. Your days bookended by delicious and included chef-prepared meals.

Make sure you take full advantage of Stoke Travel’s open beer and sangria bar. Yep, bottomless beer, and sangria for the gout affected, is on offer at Stoketoberfest for just €10 a night!

Unlimited beer and sangria, at the world’s biggest beer festival, and all because we want you to take your mind off being an urban camper for the duration of the festival. What’s not to love?