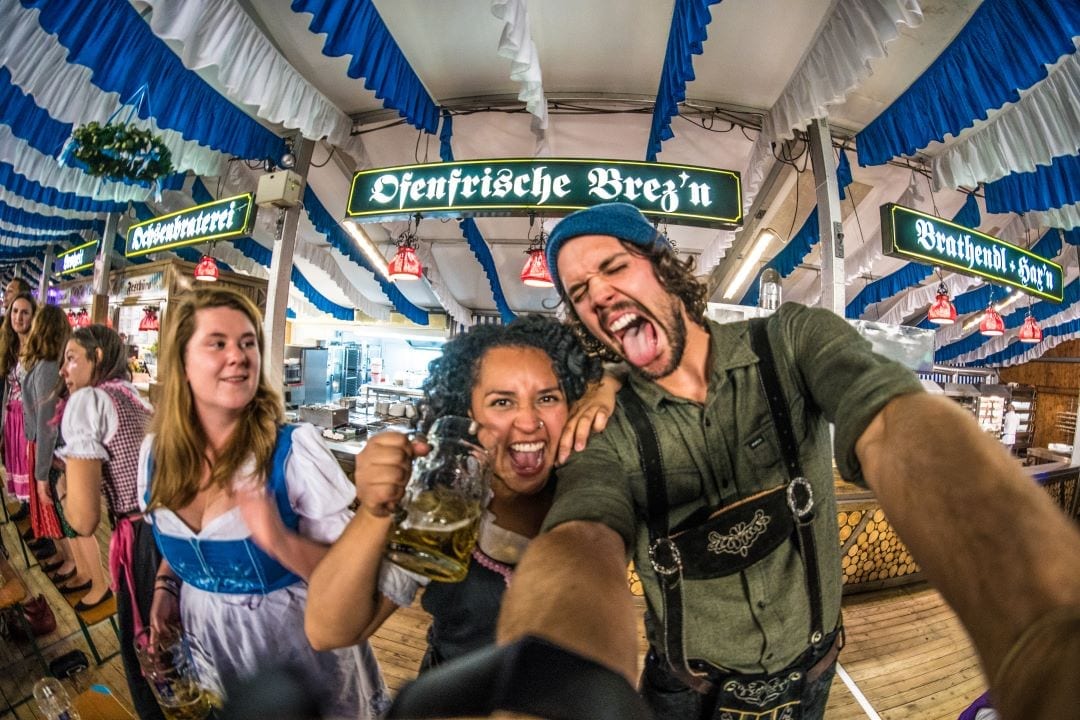 Anytime is the best time to visit Germany for Munich’s Oktoberfest, it’s the world’s original, biggest, and best beer festival! But, while Munich’s famous beer fest is always the most fun you can have as an adult, while wearing pants, there are some insider tips and tricks that can help you make the most of your time in Germany, drinking delicious German beers.

OKTOBERFEST 2023 dates are mostly in September

Oktoberfest starts at midday on the second last Saturday of September, and continues until the first Sunday of October, or October 3rd (German Reunification Day), whichever comes first. Oktoberfest 2023‘s dates are from Saturday September 16th until Tuesday October the 3rd, meaning that two of the three weekends are in September – we still don’t know why they don’t call it “Septemberfest” (probably because it doesn’t have the same ring to it). To not delve too deep into Oktoberfest history here, the original Oktoberfest, when a king married a queen, was in October and that’s the way it remained for a while, before the organisers shifted it a couple of weeks forward to take advantage of the better September weather.

The weather always changes during oktoberfest.

Every year we’ve noticed that some time during the Oktoberfest, the weather changes from hot and summery, to less hot, sometimes a little rainy, and more like autumn (fall) – sometimes all in one day! You should always check the forecast just before you set off for Munich, and even then prepare for everything. You can spend the day sitting in the sun, drinking beer in the beer halls’ beer gardens, and then that night wish you had thermals. This is the time of year when the hot summer bleeds into Munich’s long, cold winter, so the days are a little confused as to which temperature they should present us. That said, though, rain, hail or shine being at Oktoberfest is a whale of a time no matter what, even though if it’s not perfect Oktoberfest camping weather (but what we lack in solid walls, we make up for in parties, people, and value for money!).

There are three Oktoberfest weekends

There’s Oktoberfest first weekend, middle weekend and closing weekend (we know, genius). If you look deep each of these weekends has its own, distinct personality and you could have a different experience depending on when you go. If you just arrive in Munich with the sole aim of looking cute in your dirndl/lederhosen and enjoying delicious Bavarian beer by the litre, and getting into the local customs then you probably won’t even notice a difference.
NB for this we’re talking about the different visitors to Oktoberfest, but overwhelmingly, whether you visit the first, middle, or closing weekends – or midweek – Oktoberfest is filled with Munich locals and other visitors from greater Bavaria, the German state where the festival is held.

Should I go to the first weekend of Oktoberfest?

On the opening Saturday of Oktoberfest the mayor of Munich will tap the first keg at midday and from thenceforth the beers will flow. This is an unbelievably exciting moment to hear all the beer halls and the 10s of 1000s of people in them roaring in anticipation for the first beer, and the three weeks of absolute debauchery that will follow. The problem is, that in order to be a part of that moment you will have to arrive at the beer halls very early, like 8am early, in order to get into a beer hall and secure yourself a table; in the Oktoberfest beer halls you can’t get served unless you have a table. So that means you’ll be waiting for hours before you can have your first beer, which might not seem like a problem, but you WILL be hungover from the previous night’s Stoketoberfest campsite party, which is another story altogether.

But, it is worth it, and something we should all do at least once. The opening weekend is probably the busiest weekend for Aussies and Kiwis, many of whom are finishing up their summer-long van tours of Europe in Munich, but it also attracts interested partiers from across the globe who want to be able to justify day drinking by saying that it was part of a once-in-a-lifetime cultural experience.

The second weekend of Oktoberfest is Italian weekend

From Munich the north of Italy is a short trip away, just across the Alps and connected by fast train and highway, so there are always plenty of Italians in the beer halls. Anecdotally the locals say that the middle weekend is when you will find the most Italians in Munich, many identified by perfectly gelled hair and pleather puffer jackets (think Jersey Shore). These days we’ve found that many study abroad students from the USA like to come from their newly adopted cities, like Florence, Paris, Prague, Barcelona, London and others, to Munich for the middle weekend, and while there are a lot of Italians around, you could hardly say that it’s “Italian weekend”. It’s everybody’s weekend.

Oktoberfest can’t finish before German Reunification Day, which is on the 3rd of October, meaning that every year the final weekend is aligned with the long weekend associated with this holiday. This means that locals and Germans from across the country have more opportunity to come to Munich and the Oktoberfest and take full advantage of their most important national holiday. This weekend is perfect for visitors who really want to be immersed in the local culture (and there are literally millions who do come this weekend from all over the world, so don’t expect to be the lone foreigner surrounded by Germans).

This is a bit of an Oktoberfest hack, but if you come to Munich from Monday to Thursday you’re in for the treat of being there with way less tourists. This means that you’ll be able to find a table easily, be served quickly and often, be able to hit the beer halls at any time day or night, and easily hop from beer hall to beer hall and try the different flavours on offer in each (different beers, different bands, different food, different crowd – just different vibes).

You have to get into the beer halls early!

If you’re going to Oktoberfest on any of the busy weekend days, you have to arrive early, around 10am (except for opening day, see above), in order to secure a table so that you can get served. Then in the afternoon it’s not uncommon for security to do a drunk sweep and eject a whole bunch of people under the auspices of them having drunk too much, but really just to clear space for the evening’s revellers. On that note, if you miss the morning table grab you can try your luck just after lunch, as the beer halls are being emptied by security, and try and secure yourself a table for the evening. It’s not uncommon to see savvy ‘Festers running from door to door at the beer halls as the security strategically open doors and let a certain number of people in each.

If you do come midweek, however, you can pretty much arrive to the beer halls at any time of the day or night (before 10pm) and find a table reasonably easily. And don’t worry – this doesn’t mean that the beer halls are empty, even when it’s not busy the beer halls are absolutely heaving with the most fun people you’ve ever shared a beer with.

The time is now!

You’re never too old for Oktoberfest, and if you’re in Germany you’re not too young if you’re 16 years old or over. This German beer festival is an absolute bucket list event, something that absolutely everybody has to do at least once in their life – even if you don’t love beer. It’s just too much fun, drinking all the beer that your body can hold, and then dancing on the tables while oompah bands play, with your newly forged German drinking buddies. This is equal parts raging party and cultural experience, and so when you do have a slight hangover the next day (the purity of Bavarian beer does mitigate some of the worst aspects of a hangover) you don’t feel too crumby because you earned it doing something cultural.

The truly best time at Oktoberfest is found in our Stoketoberfest experience, a combination of your accommodation and the biggest party outside of the beer halls, a truly immersive experience where you will meet and drink with people from all over the world, make new friends for life, and find plenty of drinking buddies to hit the beer halls with. Stoketoberfest is Munich’s biggest accommodation option, cheapest, but also its most fun, with bands, DJs, drinking games, an open bar, and the best people from all over the world joining us in the 1000s every day of the festival. Check out our Oktoberfest packages here.