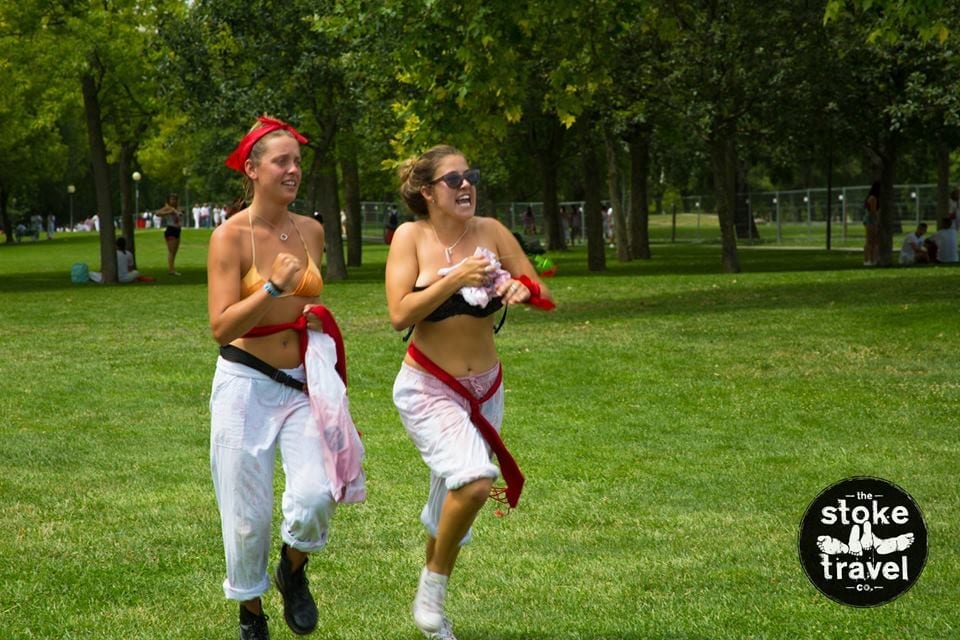 We’re going to focus on the finer San Fermin things, like partying all night long

There’s no denying that the running of the bulls is a fiesta that courts controversy, and Pamplona’s 2019 offering will be no different. While one must respect that the bull run has been in Pamplona, and Spain, since the middle ages and before, it’s tough to be a participant and not wonder whether the tradition isn’t just a bit antiquated. Surely, in this the 2019th year since Jesus first donned the Pamplona white and red, we can afford ourselves a little time to reflect on what exactly goes on during the fiesta, and how we can better be a part of it.

Now, we don’t want to preach about the ills of bull running, that’s not our place. We know that our Stokies are all adults capable of cultivating their own moral compass, able to justify what is right and wrong in their own mind. We’ve also long thought that there’s no way to really have a strong opinion about the running of the bulls unless you’ve participated in, or at least witnessed, the spectacle. Combine that with the fact that the worst way to try and change somebody’s perspective about something is by making them feel bad about it, like when a new vegan calls you a murderer for munging on a hamburger. Please, Deborah, politely go and screw yourself and take your mungbeans with you.

What we do know is that for the young people of Pamplona, San Fermines isn’t about the bull run. Last year we spent a lot of time walking around and interviewing the people in the streets, and overwhelmingly the young locals told us they weren’t interested in throwing themselves in front of half-tonne, horned death machines*. For the young locals of Pamplona, the big attraction was the week-long street party, along with the dancing and drinking and meeting new people that comes with it. When you walk through town early each morning towards the bull run and see the carnage, the drunks stumbling out of clubs and the party animals still raging, you realise that very few Pamplona natives care to participate in San Fermines’ most infamous tradition.

We’ve also noticed that the party is seen by some travellers as being an overly masculine pursuit. This is because, in the mind of some, they can’t see the fiesta for the bull run.  They put all the emphasis on what is essentially five minutes each morning of a 24 hour party. We’ve seen more and more men coming to Pamplona and less women, and this is something we’re going to change this year.

For Stoke in 2019 we’re going to focus on the party side of Pamplona. Sure, if you want to run we’ll encourage you to do so and guide you through it so you can do it safely- but it’s not our focus. Our focus will be on the traditional party, the ragers in public squares and alleyways, the bars, clubs and the fireworks that make this not only Spain’s, but Europe and maybe the world’s biggest street party. We’re going to join the young locals in celebrating their city, Spain and summer every damn day of San Fermin.

But more than that we’re going to transform our campsite into a festival. We’ve got plenty of space, nice grass and shaded tree areas, so we’re going to bring along bands and DJs and organise sporting games. We’ve got pools, so we’re going to throw pool parties. There will be space for local wine makers to share their vinos, for food trucks to offer good grub and for all our Pamplona Stokies to mingle and dance in pre/post-party stumbling distance from where they sleep. We’ll be offering all of this as well as our industry-best meals-tents-mattresses-sleeping bags inclusions, and our world famous all-you-can-drink beer and sangria bar onsite. We’re calling it Stoked in the Park and we’re pretty sure it’s going to change the way people think about Pamplona. Just the pool parties alone are going to be epic, and they’ll be happening before you even leave the campsite.

So that’s what we’re going to do.  What we want you to do is consider taking on this new type of festival travel with us. We want you to look for something bigger, better and more fun than the old ways of doing Pamps. We want you all to come this year for the party, not the bulls, and to make this ancient fiesta the biggest rager of the year. Let’s make Pamplona about the partying again.

Tell your pals and book Stoked in the Park tickets now. Let’s get bull-wild in Pamplona for 2019. Yeehaw!

* We’ve always called the Pamplona bulls “death machines” or other gnarly names, but the reality is that they’re not. Apart from the five minutes of chaos and confusion they’re put through, they’re really pacifistic beasts. Next time you’re in Pamplona take a little cruise and check out the bulls before the run. Just chilling, standing around, no idea what’s about to happen to them, definitely not keen on killing anybody.